Villa Fontani is a beautiful Villa, that is divided into 2 separate Apartments, which are rented togehter as one independent Villa in Tuscany. Part of the Villa is a farm with 150 hectars of land, that surrounds the villa. From the villa there is a spectacular view in the valley.

The originals of the Villa are in about 1700 and it was restaured with attention for the details in 2007.

Technical description of the Villa

The villa is for 12 plus 3 persons, so maximum for 15 persons. The Villa is divided into  2 separate appartements, that are rented  together as one.

There is a garden and a pool (6x12 metres), a car parking, Sat-TV, washing machine, dishwasher, oven and freezer.

Please note, that the map doesn't show the villa itself but the nearest city.

Calendars in blue show the prices, but no availability. Click on your preferred
holiday week to inquire about the holiday home. We will check the
availability immediately for you and get back to you fastly. Feel free to call us

I look forward to your inquiry and will be happy to be there for you before and during your holidays! I have visited all holiday homes in person to support you in the best way.
So do not hesitate to contact me. Best, Frank Fingerhut Phone +41 798154906 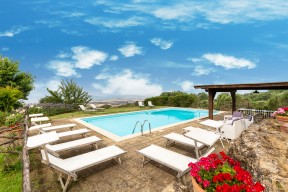 Can we assist you?

It is our pleasure to assist you for finding your Villa in Tuscany, Italy. Send us a short message and we will contact you fastly. Or call: +41 798154906. Thanks!

We received your message and will contact you within 24 hours
×

Your message could not be sent. You can try to contact us here.

Let us know, when you want to be called. We will get in touch with you at your favourite time.

We received your callback request.

Your message could not be sent. You can try to contact us here.
×